Every Premier League team now has either 5 or 6 matches remaining this season. The alt-3 league table takes proper account of games in hand — as well as the strength of opponents in each club’s remaining fixtures — to give a more informative picture of how the league currently stands.

At the top of the table, there’s not much to say other than that Tottenham have a game in hand over Liverpool, which puts Spurs in third place once that is taken into account.

Much less obvious is the situation nearer the bottom of the table. As has been the case for much of this season, it is very congested in the lower half of the Premier League. The alt-3 table does have a more interesting story to tell there — most notably about the relative standing of Brighton and Crystal Palace, who will face each other at Selhurst Park next weekend in the so-called ‘M23 derby’ match.

Despite the fact that Brighton have four more points in the bag than Crystal Palace, and a game in hand, today’s alt-3 league table shows the two local rivals neck-and-neck, with Palace even a bit ahead of Brighton once proper account is taken of the matches already played (and thus also the matches that are still to be played) by each team.

The reason is that the two clubs are currently at opposite ends of the ‘schedule strength’ spectrum. Brighton’s current alt-3 schedule-strength rating is −3.1 points, reflecting that they have the hardest run-in of any team to the end of the season; whereas Crystal Palace’s rating is +2.1, implying that they have the easiest run-in of any team. The difference (5.2) between those two schedule strengths is just enough to reverse the two clubs’ positions in the alt-3 league table, even though Brighton have a match in hand.

This excerpt from Brighton’s current schedule-strength chart shows just how hard their season end looks to be: 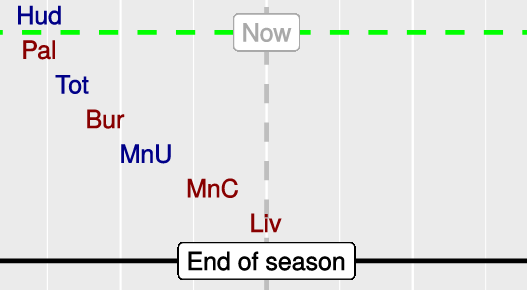 Brighton will play 4 of their remaining 6 matches away from home, and they must still face 5 of the current top 7 clubs in the Premier League. Alternatively, viewed from another angle: Brighton’s current total of 35 Premier League points has been achieved with the help of the relatively easy set of fixtures that Brighton have had since the halfway point of the season.

Neither Crystal Palace nor Brighton are yet clear of relegation danger. And the alt-3 analysis shows just how close the two clubs are to one another, ahead of the coming weekend’s head-to-head ‘M23 derby’ match.

A couple of further things worth mentioning in connection with this:

The point about ‘not a prediction’ is important. The alt-3 method (just as the official league table) is based on all of this season’s match results — but nothing else. For accurate prediction, on the other hand, such things as player injuries, suspensions, managerial changes, cup tournaments and ‘current form’ might also be thought relevant; but all such things are ignored by alt-3.

(In relation to Brighton’s remaining fixtures, for example, it is noteworthy that their game in hand arises from postponement of a match against Manchester City. By the time City get to play Brighton it seems likely they will have won the league already — something that could conceivably work to Brighton’s advantage. That is potentially useful information for predictive purposes, but it plays no role in either the official Premier League table or the alt-3 view of it.)

To see any other club’s schedule-strength chart, just click on the club name in the alt-3 league table.