It’s that time of year again, when the remaining fixtures of bottom-half clubs come under close scrutiny. The unique alt-3 methodology comes into its own at this point — it can put some principled, mathematical muscle on the bones of those fixture lists.

Unless some miracle happens, one of the relegation spots looks to be spoken for already. West Brom have been remarkably consistent since the first two weeks of this season, at least as far as match results go!

If West Brom don’t achieve their hoped-for ‘Great Escape II’, that still leaves two relegation places wide open. Every club below the current top 8 is still to some degree in danger — which is pretty unusual at this late stage of the season.

The alt-3 league table re-orders the official Premier League table, in a mathematically principled way to take account of how easy or hard each team’s season has been up to now (and therefore, at the same time, how hard or easy is each team’s remaining fixture list). The alt-3 table takes into account, for each team, which other teams have been played already, and whether matches were played at home or away.

A crucial point about alt-3 is that it is not a prediction of the future, just a better representation of this season’s match results to date — and, importantly, a representation that fully respects the league’s points system (3 for a win, 1 for a draw). In essence, the method gives a systematically better answer to the question: ‘If all clubs were to continue to achieve match results consistent with their actual results so far this season, how should we expect the league table to look at the end of the season?’

That’s a ‘what if?’ question — and the answer is just a projection forward from the season’s results so far. The point of the alt-3 methodology is to provide a systematically more informative projection forward than the officlal league table does — no more, no less than that.

Saints and Seagulls set to struggle?

Right now, the alt-3 league table shows that two clubs — Brighton and Southampton — face particularly tough fixture lists in their remaining 9 matches. Here is a snapshot (at the time of writing this) of the relevant part of the alt-3 table: 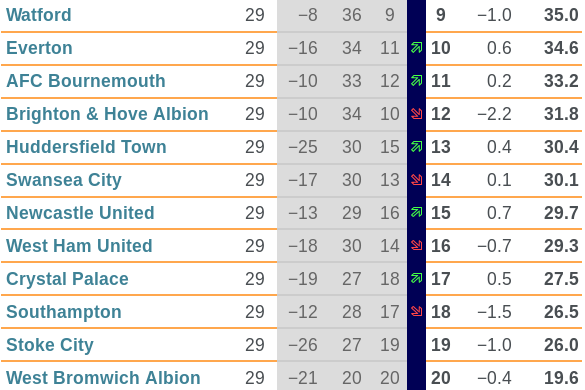 Southampton in the relegation zone

The alt-3 methodology quantifies just how hard that remaining fixture list is, in terms of the effective number of league points that should be subtracted from Southampton’s current total to take account of the fact that they have faced a relatively easy fixture list so far. The Saints’ current alt-3 schedule strength rating, as shown in the above schedule-strength chart, is −1.5 league points, which is strongly negative and more than enough to move them below Crystal Palace.

As an aside: A remarkable feature of Southampton’s schedule-strength chart is that it sits entirely to the left of the zero-line, which indicates that their position in the official league table has flattered the Saints throughout the whole of this season. This is just an accident of the fixture-list scheduling. At no point this season have Southampton been in the position of having an easier fixture list ahead of them than the matches they had already played!

Brighton not really a top-half club, just yet

The club whose run-in to the end of the season is rated as the hardest of all is Brighton and Hove Albion. In their remaining 9 matches the Seagulls will play 5 games away from home, and will face no fewer than 6 of the current top 8 teams in the league.

That sounds like an extremely tough run of matches for Brighton! The alt-3 league table quantifies just how hard: in order to take that properly into account in the league standings, 2.2 league points should be deducted from Brighton’s current total. Right now, then, based on all their results to date, Brighton are more justifiably placed 12th in the league — not 10th as in the official league table at present, which takes no account of the Seagulls’ relatively easy list of matches played to date.

The alt-3 Premier League table is updated every week, to incorporate the results from each matchday.

To see any club’s current alt-3 schedule-strength chart, just click on the club name in the alt-3 league table.

As the end of the season gets very near, the schedule-strength imbalances will all steadily vanish, of course: in the end, every team will have played all others twice, once at home and once away. The alt-3 method will therefore agree perfectly with the official league table by the end of the season. Until then, though, the alt-3 table continues to provide a more informative view of where each team stands.