This coming Tuesday (April 20th) I’ll be giving a Zoom talk about all this, in the statistics seminar series of Ca’ Foscari University in Venice. In case any reader of this wants to attend, the details are at https://www.unive.it/pag/16818.

I am excited to be giving that talk tomorrow (albeit that I would very much prefer to be visiting Venice in person!) Ahead of that talk ‘in Italy’, I take a look here at the Serie A table. Here is how the alt-3 table stood this morning, 2021–04–19: 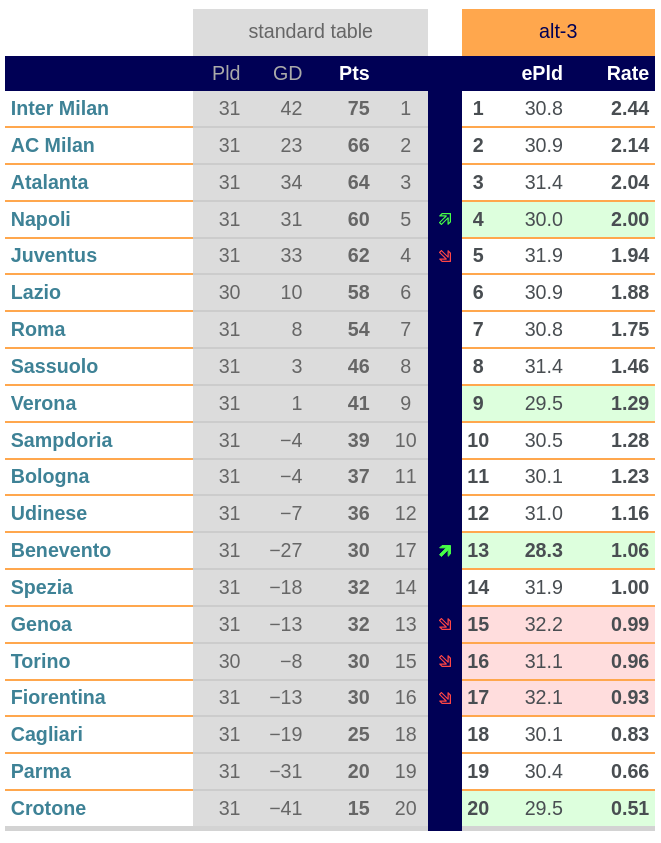 The main differences between the official and alt-3 tables are these two:

Here I will briefly look at their alt-3 schedule strength charts to show how Napoli and Benevento are, in reality, doing better than the official league table suggests.

Shown here, side-by-side, are today’s schedule-strength charts for Napoli and Juventus. The two teams’ run-ins to the end of the season are almost mirror images of one another. Juventus still face matches at home against AC Milan (whose away form is extremely strong) and against top-of the-table Inter, plus an away match at Bologna who are strong at home; whereas Napoli’s last 6 matches of the season will all be against opponents from the lower half of the table.

Schedule-strength chart for Benevento, from now to the end of the season: 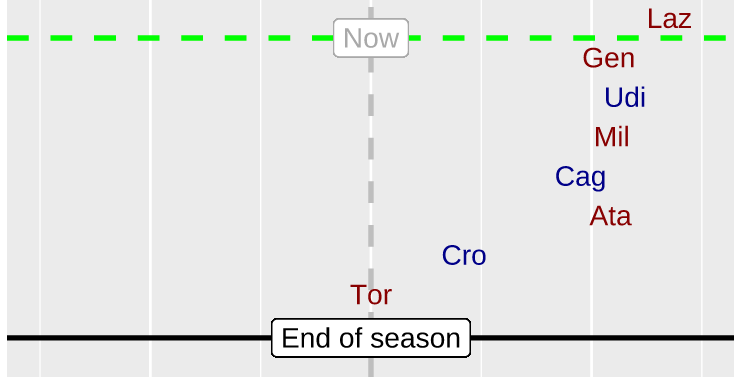 Benevento are far from being the strongest team in Serie A, but in their remaining seven matches they will see three of their biggest opportunities to gain league points, in home matches against Cagliari and Crotone and an away match against Torino (whose home form has been poor this season). Benevento’s current ePld (effective matches played) is only 28.3, which is much smaller than the corresponding ePld values for the four teams who are currently placed above Benevento in the official league table. This is enough to lift Benevento to 13th place in the alt-3 table, above all four of Spezia, Genova, Torino and Fiorentina.

As ever: to see any team’s full schedule-strength chart, showing the extent to which their fixture list to date has been relatively easy or hard, just click on the team’s name in the alt-3 Serie A table.